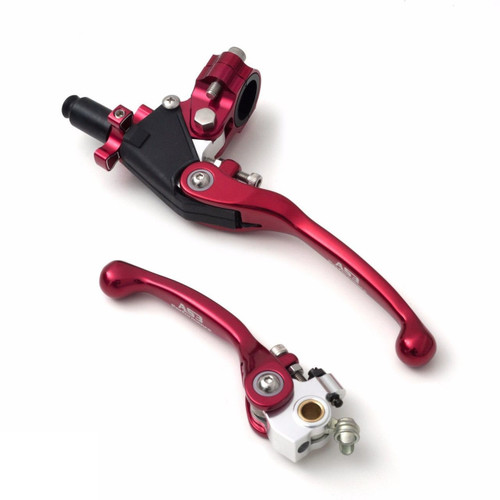 The AS3 Performance Factory Series front brake and clutch levers are one of the most advanced and most adjustable lever sets on the market. Both levers feature a flexible pivot design which allows the levers to bend outwards on impact to prevent them snapping or bending. Both levers also have an adjustable reach setting allowing the rider to set their preferred distance between the lever and the bars. The clutch assembly replaces the entire OEM perch and is fitted with a 'quick adjust' clutch cable adjuster which allows the rider to easily adjust the responsiveness of clutch cable while riding. The clamp on the clutch perch comes with 2 smooth plastic inserts, these inserts help prevent damage to the assembly by making the whole perch rotate on impact. The clutch assembly is finished off with 2 rubber boots which neatly cover vital areas to keep out dirt and debris.